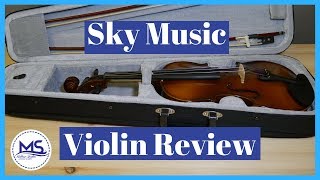 As a seller, the one most frequently asked question by newbies and parent is "Why my violin does not make sound" . It is like sitting in a new car, without putting gear in Drive and asking why my car is not moving. Though a violin is not as complex as a car, as a owner, it is important to know the basics to fully enjoy the instrument.

So to answer this question, we found this article from wikihow.com is very helpful, and we would like to share with you.

How to Rosin a Bow

A bow without rosin will produce virtually no sound when it’s drawn across the strings of an instrument. But when rosin is added to your bow, it’s able to “catch” the strings and produce vibrations, which result in the music you hear. If you’re starting with new rosin, you’ll need to rough up the surface. Then you can make your first application to a new bow or regularly apply it to an old one.

Method 1 Choosing and Preparing the Rosin

​1. Buy light rosin for smaller instruments. There are different types of rosin, but the two most common are light rosin and dark rosin. Light rosin is harder, and not quite so sticky as dark rosin. It's sometimes called amber or summer rosin (for the time of year it's tapped), and it's appropriate for the higher strings, like violins and violas.

2. Choose dark rosin for a fuller sound for larger instruments. Dark rosins, or winter rosins, tend to be very sticky. The stickier the rosin is, the fuller the sound will be. Select a dark rosin if you play a low-stringed, large instrument like the cello, for which a fuller sound is preferred.

3. Select boxed rosin for a durable, low-priced option. Boxed rosin, as its name suggests, comes in a box, which makes it less prone to cracking and breaking. It's typically only available as a light or summer rosin and is usually a lower quality than cake rosin. But its low price tag makes it a good option for beginners.

4. Opt for cake rosin for a higher-quality product. While cake rosin tends to be more expensive than boxed rosin, you're getting a purer, more high-quality rosin. It comes in a variety of colors, from amber to black, so you can select the best kind for your instrument.

5. Rub new rosin with fine-grit sandpaper to increase stickiness. New rosin needs to be roughened in order for it to stick to your bow. Take a piece of sandpaper, around 220-grit, and rub it all over the top of the rosin block. Stop when you see the rosin producing dust.

1. Tighten the bow. Twist the screw at the end of the bow and tighten it until it appears straight and parallel with the hairs. Then slacken it just a little until you see the curve reappear in the wood. This is the best position for the bow to be in while you play.

3. Stroke the bow all the way across the rosin. Run the bow along the rosin from the tip down to the frog (the part you hold with your hand), and then stroke it back again. Grasp the bow gently and press down just hard enough that the bow hairs produce some dust, but not so hard that you’re clenching the bow.

4. Repeat for 20 full strokes. Stroke the bow back and forth across the rosin 20 times. Each time you finish a complete stroke (down and back), move the bow hairs over slightly to a new spot so that you don’t wear a line straight down the middle of the rosin.

5. Play the instrument and listen for a full sound. After twenty strokes, draw your bow along the strings of your instrument. Listen for a full, uninterrupted tone. If the sound is uneven or you feel the bow slide around on the strings, you’ll need more rosin.

6. Stroke the rosin 20 more times. If the first 20 strokes didn’t produce the sound you want, repeat the process of stroking the bow over the rosin again. Add 20 more strokes, and then play the instrument to check the sound again.

So, when you receive your new violin and "it does not make sound", don't panic, don't blame the innocent seller, all you need do is pull that rosin cake out and start rosining.